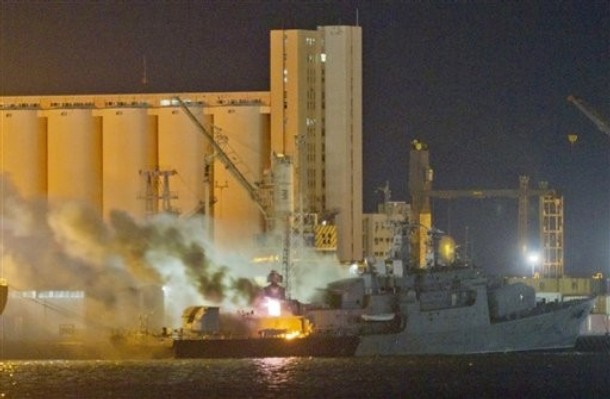 Smoke and flames pour from the Libyan Navy frigate Al Ghardabia, after it was hit during an airstrike by Tornado bombers of Britain's Royal Air Force on the port area of Tripoli, in the early hours of Friday May 20, 2011. NATO confirmed that its warplanes targeted the vessels and accused Libya of using its ships in the escalating conflict, including attempts to mine the harbor in Misrata. Rebels trying to end the nearly 40-year rule of Libyan leader Moammar Gadhafi have been struggling to hold the Western city of Misrata against repeated attacks by forces loyal to Gadhafi. (AP Photo)

Meanwhile, Russia Today has video footage of the strike on the Al Ghardabia, as well as cockpit video of the strikes on Libyan warships, released by the RAF.
﻿﻿﻿﻿