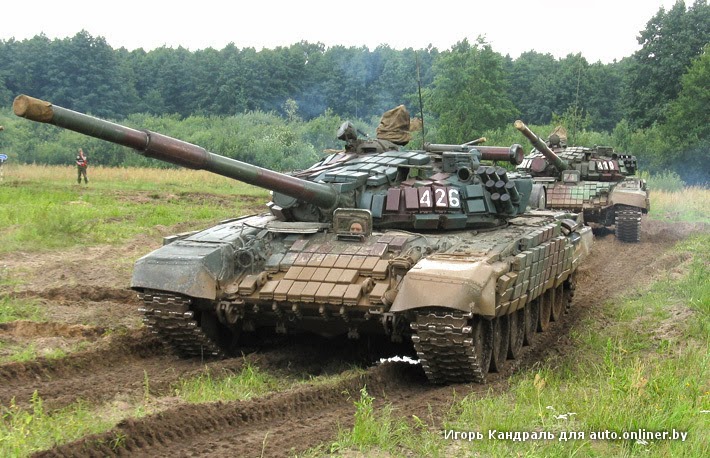 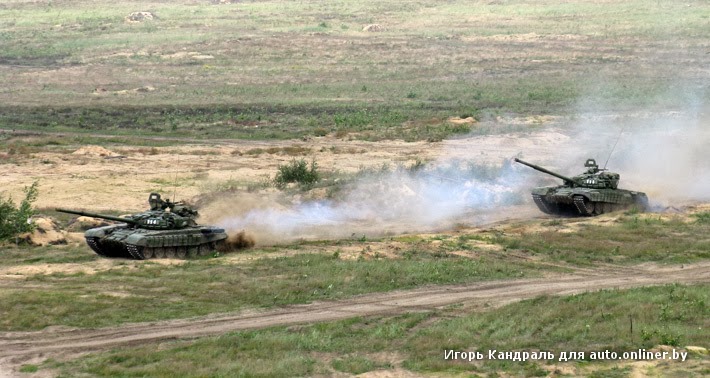 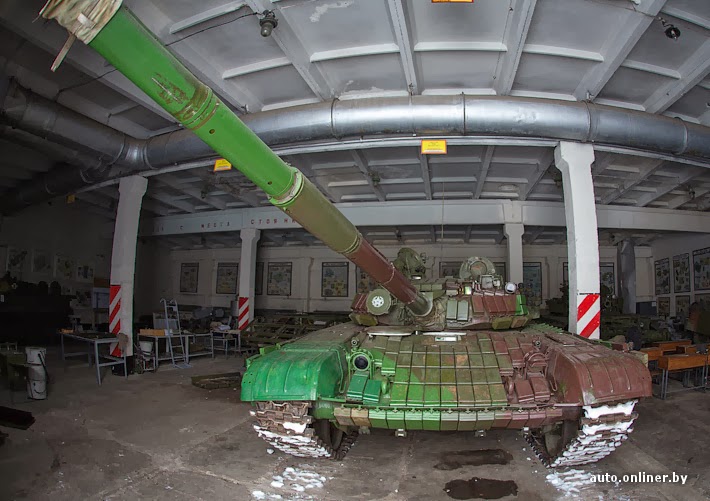 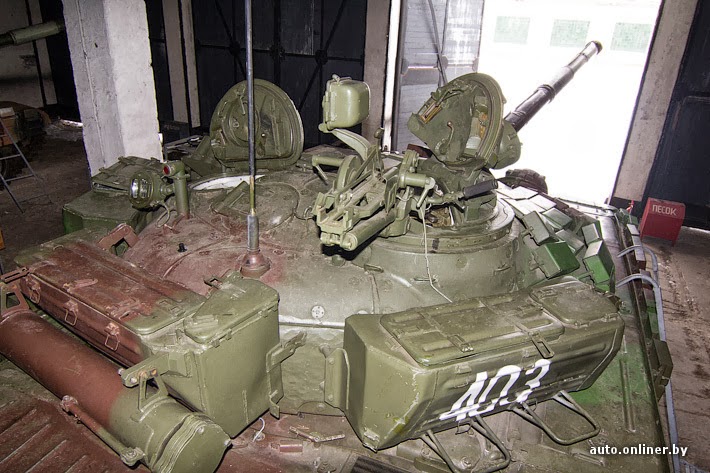 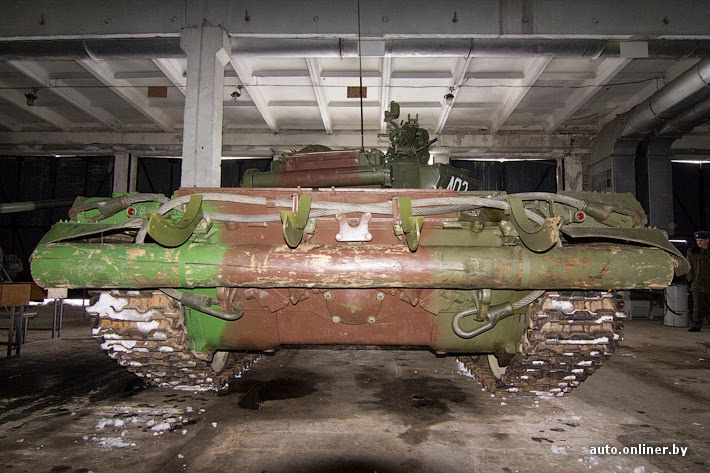 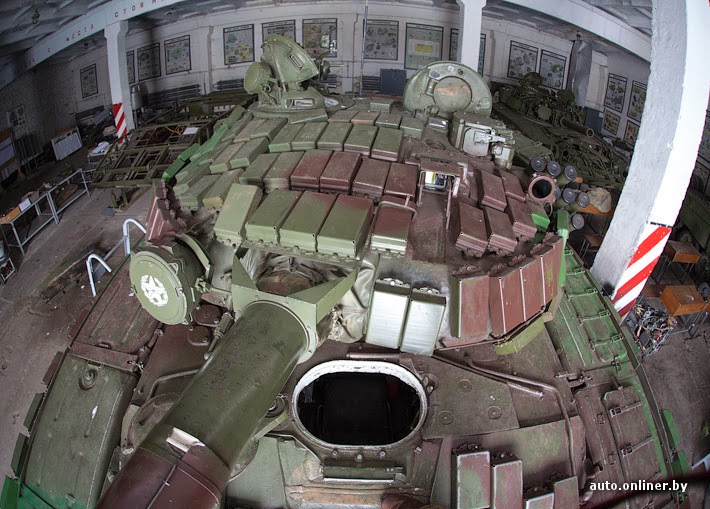 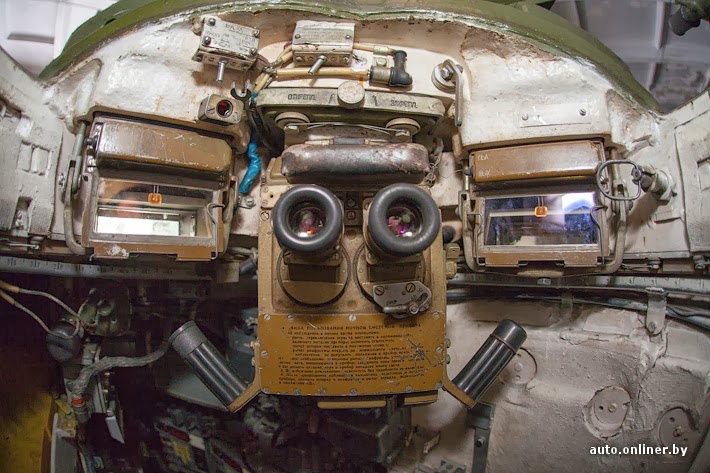 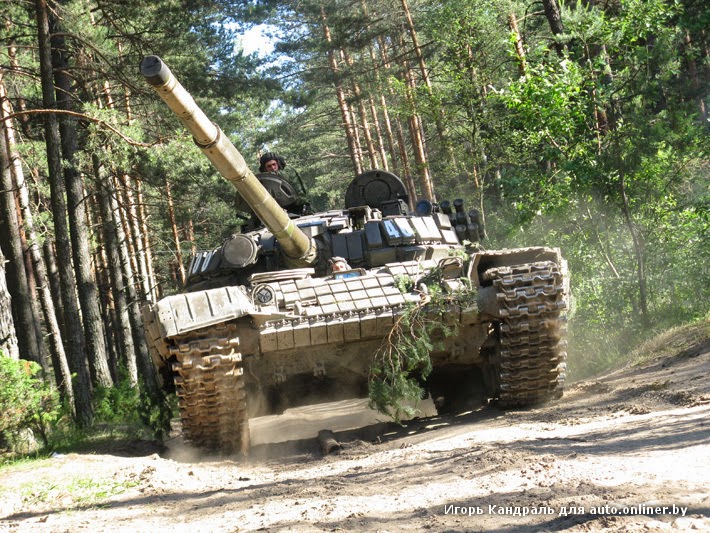 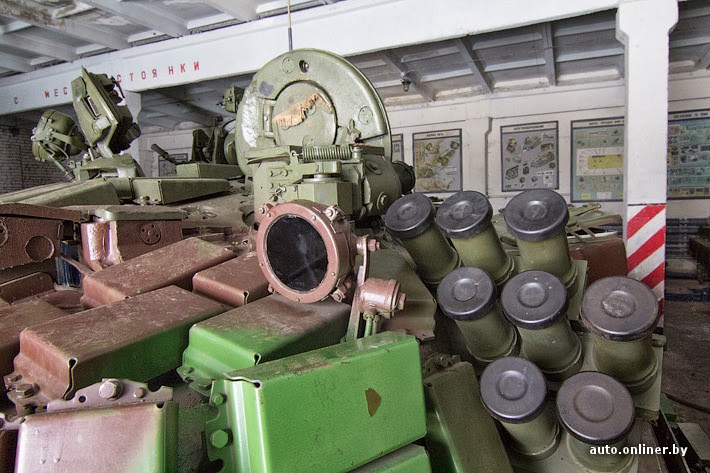 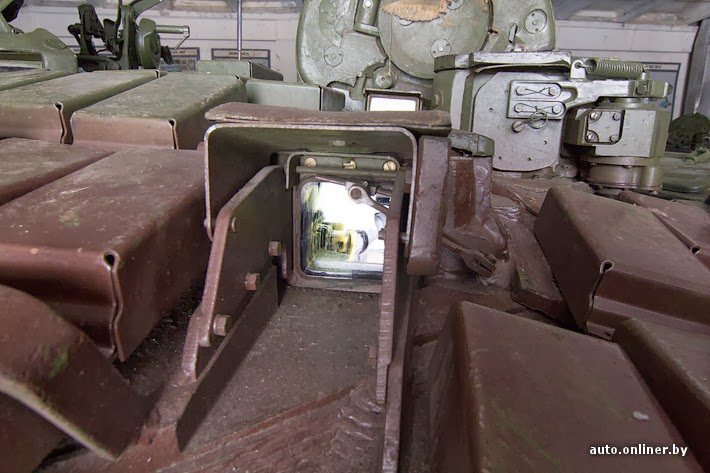 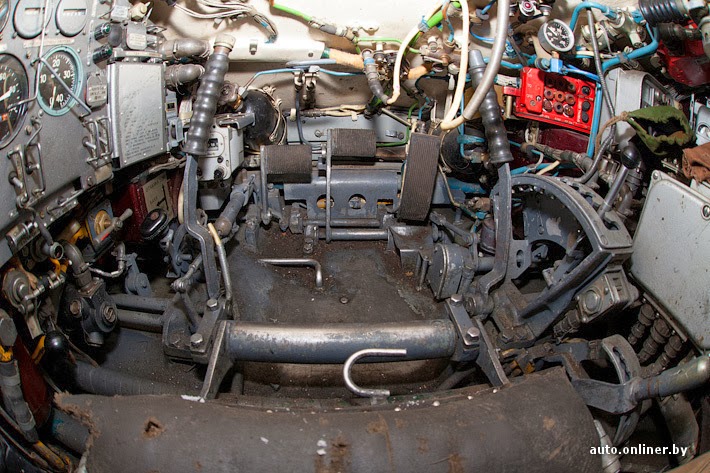 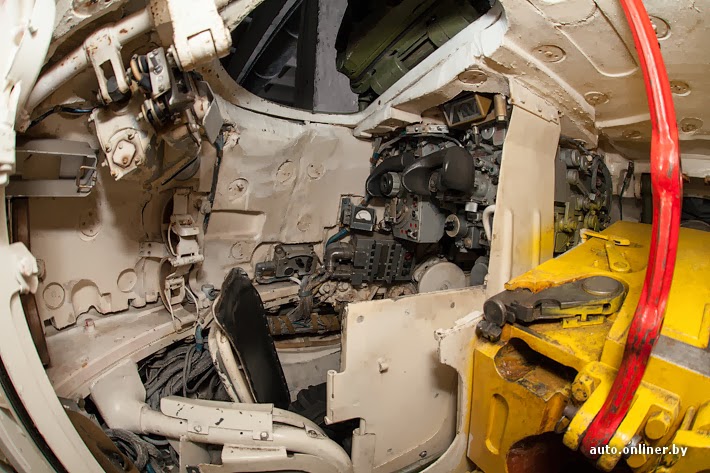 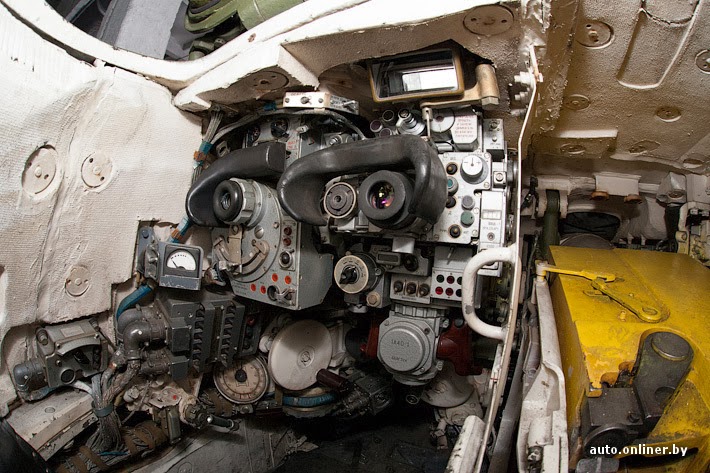 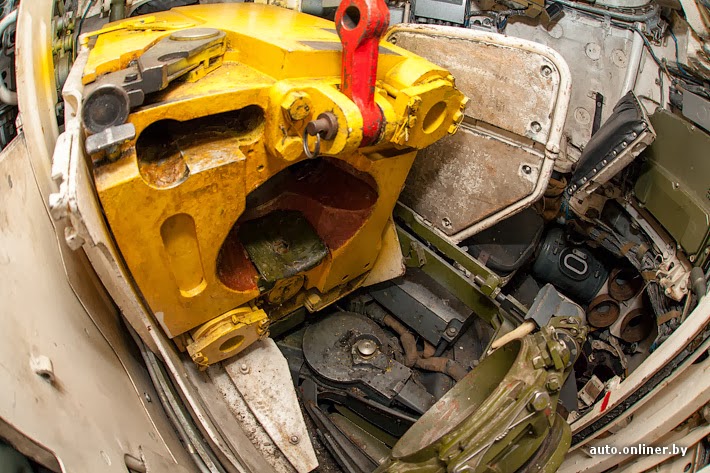 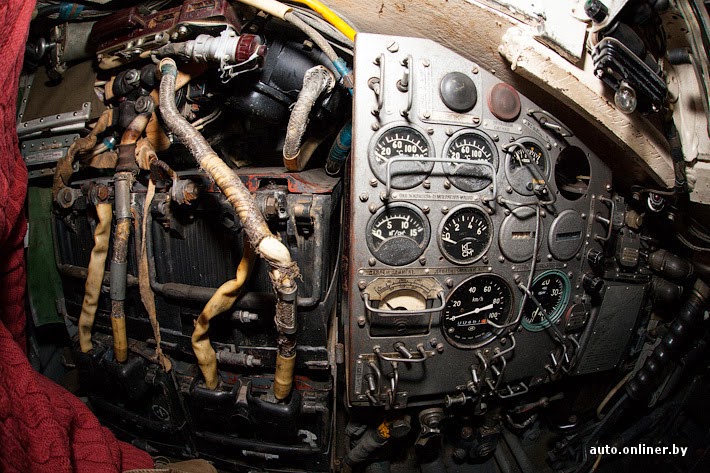 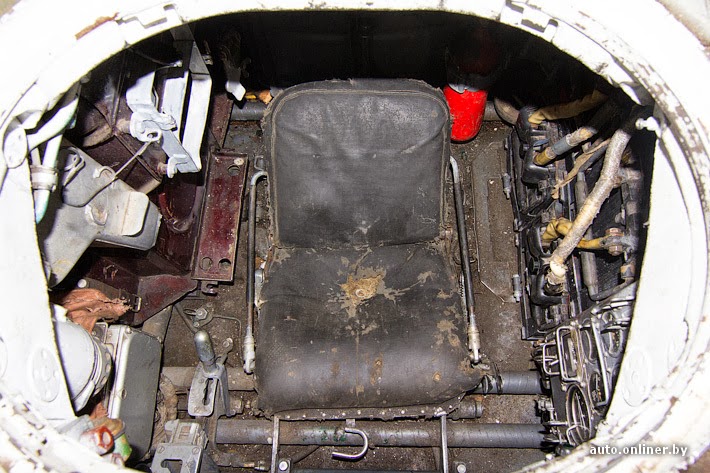 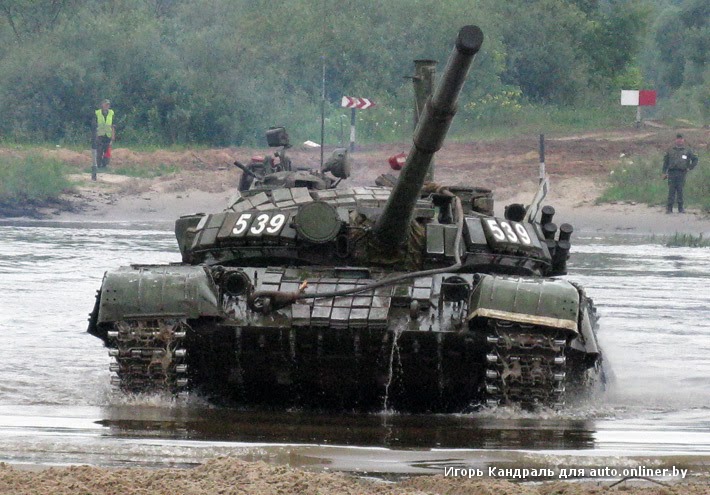 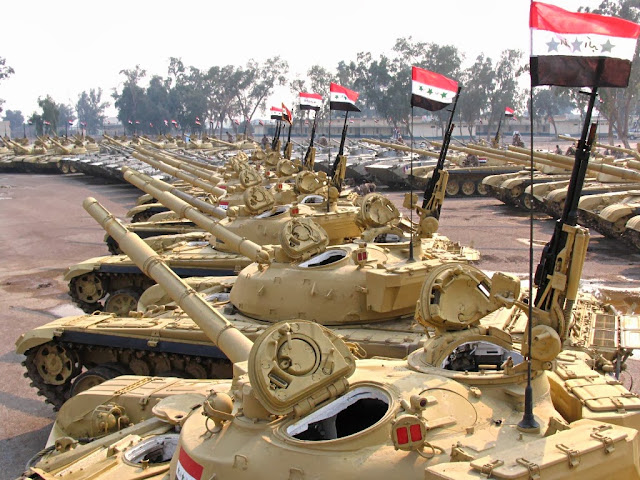 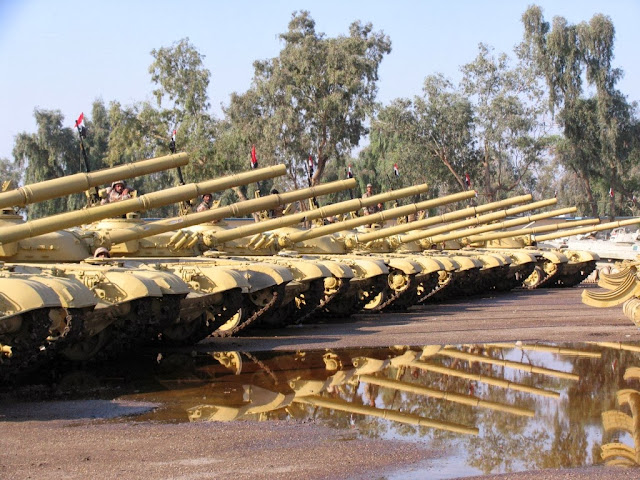 The T-72, which entered production in 1971, was first seen in public in 1977. The T-72, introduced in the early 1970s, is not a further development of the T-64, but rather a parallel design chosen as a high-production tank complementing the T-64. The T-72 retains the low silhouette of the T-54/55/62 series, featuring a conventional layout with integrated fuel cells and stowage containers which give a streamlined appearance to the fenders. While the T-64 was deployed only in forward-deployed Soviet units, the T-72 was deployed within the USSR and exported to non-Soviet Warsaw Pact armies and several other countries. In addition to production in the USSR it has been built under license in Czechoslovakia, India, Poland and former Yugoslavia.
DESCRIPTION:
The T-72 medium tank is similar in general appearance to the T-64.
The T-72 has six large, die-cast, rubber-coated road wheels and three track return rollers. It has a 14-tooth drive sprocket and a single-pin track with rubber-bushed pins.
The gunner's IR searchlight is mounted to the right of the main gun. The 12.7-mm NSV anti-aircraft machine gun has a rotating mount, and there is no provision for firing it from within the tank. There are normally only a few small stowage boxes on the outside of the turret, and a single short snorkel is stowed on the left side of the turret.
The T-72 has a larger engine compartment than the T-64, and the radiator grill is near the rear of the hull.
CAPABILITIES:
The T-72 has greater mobility than the T-62. The V-12 diesel engine has an output of 780 hp. This engine appears to be remarkably smoke-free and smooth-running, having eliminated the excessive vibration which was said to cause high crew fatigue in the T-62. Although the engine is larger than that of the T-64, the heavier (41 mt) T-72 is believed to have approximately the same road speed as the T-64. The T-72B1 is powered by a multi-fuel V-12 piston air-cooled 840 hp engine that will run on three fuels: Diesel, Benzene or Kerosene. Two 200-liter auxiliary fuel drums can be fitted on the rear of the hull. The T-72 can be fitted with a snorkel for deep fording, and takes about 20 minutes to prepare for amphibious use.
The T-72 has better armor protection than the T-62, due to the use of layered armor and other features discussed above under T-64 capabilities. The advanced passive armour package of the T-72M and T-72M1 can sustain direct hits from the 105mm gun equipped M1 Abrams at up to 2,000 meter range. The later T-72Ms and T-72M1s are equipped with laser rangefinders ensuring high hit probabilities at ranges of 2,000 meters and below. The turret has conventional cast armor with a maximum thickness of 280-mm, the nose is about 80-mm thick and the glacis is 200-mm thick laminate armor. Besides the PAZ radiation detection system, the T-72 has an antiradiation liner (except on export models) and a collective NBC filtration and overpressure system.
The T-72 has the same integral smoke generating capability as earlier T-54/55/62, tanks, and variants have been observed with smoke grenade projectors mounted on the front of the turret.
The T-72 employs the same armament, ammunition, and integrated fire control as the T-64. The low, rounded turret mounts a 125mm smooth bore gun with a carousel automatic loader mounted on the floor and rear wall of the turret. The 125mm gun common to all the T-72 models is capable of penetrating the M1 Abrams armour at a range of up to 1,000 meters. The more recent BK-27 HEAT round offers a triple-shaped charge warhead and increased penetration against conventional armors and ERA. The BK-29 round, with a hard penetrator in the nose is designed for use against reactive armor, and as an MP round has fragmentation effects. If the BK-29 HEAT-MP is used, it may substitute for Frag-HE (as with NATO countries) or complement Frag-HE. With three round natures (APFSDS-T, HEAT-MP, ATGMs) in the autoloader vs four, more antitank rounds would available for the higher rate of fire.
The infra-red searchlight on the T-72 is mounted on the right side of the main armament, versus on the left on the earlier T-64. The 1K13-49 sight is both night sight and ATGM launch sight. However, it cannot be used for both functions simultaneously. A variety of thermal sights is available. They include the Russian Agava-2, French SAGEM-produced ALIS and Namut sight from Peleng. Thermal gunner night sights are available which permit night launch of ATGMs.